Foreign Divorce: Do you want to remarry in the Philippines? 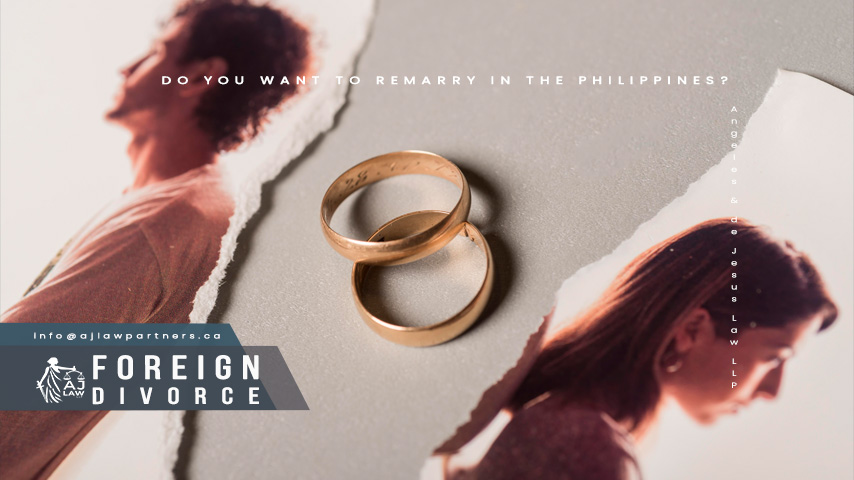 Your Filipino Lawyer in Toronto from AJ Law LLP can help you.

The citizenship at the time of the divorce is what matters

What matters is the citizenship when the divorce took place. Even if the couple were both Filipinos when they married, the Canadian divorce can be recognized in the Philippines if one or both of them is no longer a Filipino citizen when the Canadian divorce is approved.
This is true even if the Filipino spouse was the one who applied for divorce. So long as one of them was not a Filipino, it does not matter whether the divorce was initiated by the Canadian or Filipino spouse.

How can it be recognized?

After the divorce in Canada becomes final, a case for its recognition can be filed with a court in the Philippines. The object of the case is to prove that the divorce took place and was valid in Canada.

Who can file the case?

Either ex-spouse can file the recognition case. Once the court accepts the case, it will send notice of the proceedings to the other ex-spouse.

Where is the case filed?

If the couple was married in the Philippines, the case to recognize their Canadian divorce should be filed in the city or province where the marriage took place.

If they were married outside the Philippines, the case is typically filed in Quezon City because that is where the national office of the Philippine Statistics Authority / Civil Registrar General is located.

What is needed for the court case?

This is done by presenting the following documents to the Philippine court:

Since they are to be used in a Philippine court, the documents originating from Canada must be authenticated by the Philippine Consulate.

It is preferable that the applicant should testify to these documents at the trial.

Because of the pandemic, Philippine courts have adopted video conference court hearings which may allow testimony to be received remotely.

What happens when recognition is granted?

Recognition of the Philippine divorce will also allow the Filipino to remarry under Philippine law. We can arrange to help you with all these as well. You may find more resources related to this at http://www.lawyerphilippines.org/

You can talk to our Filipino Family Lawyer in Toronto to guide you to understand more about the process of divorce in Canada and having it recognized back home. Contact AJ Law LLP’s Divorce Lawyer by calling us at +1 (416) 409-5991 or via email at info@ajlawpartners.ca. You can also visit our website at www.ajlawpartners.ca for more information about our Law Firm.

As cliché as it sounds, we fervently believe that in all relationships, communication is the key. Our team prides itself on rendering the necessary legal service with a personal touch. We will present you with various options that would address your legal issues and recommend the best approach possible based on our professional assessment. However, we would not only give you sufficient time to think and choose on your own, but we will patiently guide you through the process, every step of the way. We provide constant updates and feedback so you and AJ Law LLP can make your life-altering legal decisions hand in hand.