3-Step Guide on How to Apply for Lonely Canadian Program 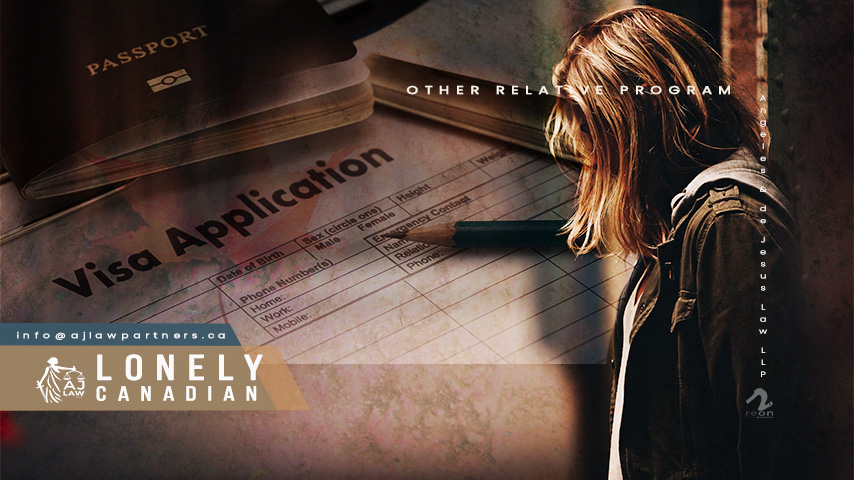 LONELY CANADIAN OR OTHER RELATIVE PROGRAM

Are you alone in Canada, finding yourself without family here? Your Filipino Immigration Lawyer in Toronto at AJ Law LLP can help you sponsor a relative to come to Canada under the “Lonely Canadian Program” or “Other Relative Program.”

Sponsoring your husband, children, or family, in general, is all some people know or often hear and talk about. But have you heard of the rule “Lonely Canadian?” if you have not heard of it, I encourage you to stay and read these. This might help you. In this article, we will be talking about what is called Lonely Canadian and how you can apply under this category, and who is eligible. A lonely Canadian is under a program that is generally referred to as the “Lonely Canadian Program” or the “Other Relationship Program” that allows a person who is a Canadian Citizen or a permanent resident to sponsor one adult son or daughter, brother, sister, uncle, aunt, niece, or nephew to immigrate to Canada. If that extended family member is married or has children, the person being sponsored can bring their immediate family with them to Canada. But the person being sponsored has to be related to the sponsor by blood.

In order to sponsor such a relative, however, the Canadian or permanent resident must show that he or she does not have a spouse, common-law partner, child, parent or grandparent or child who is either a Canadian citizen or a permanent resident, or who is a foreigner that can be sponsored. For example, if you are a Canadian citizen and is married, you cannot sponsor your uncle or aunt to immigrate. The program is designed to favour persons who do not have relations in Canada and have no possibility to sponsor immediate family.

If you sponsor a relative to come to Canada as a permanent resident, you must be able to meet basic needs for yourself and your relative, such as:

Support your relative financially when they arrive with regards to the following:

1. Get the application package

The application package includes the:

Read the guide before you fill in the forms. Make sure you are eligible to sponsor a relative before you apply. Your application fee is not refundable.

All information in your application must be true. You must tell the truth about:

The people you sponsor must also declare about each of their close family members. These family members must have a security and criminality check and a medical exam. If they do not, the sponsored person will not be able to sponsor them in the future.

In most cases, you must pay a biometrics fee when you submit your application. Otherwise, you may experience delays. The biometrics fee covers the cost of collecting fingerprints and a digital photo.

Depending on your situation, you may need to pay third parties for:

You can submit all your application documents in the mailing address provided in the instruction guide of your package.

Let AJ Law LLP and our Filipino Lawyer in Toronto help you sponsor your relatives to come to Canada through the “Lonely Canadian Program” or “Other Relative Program.”. We have a Filipino Immigration Lawyer ready to assess your qualifications and assist you throughout the whole process. Call us at (+1) 416 409-5991.

As cliché as it sounds, we fervently believe that in all relationships, communication is the key. Our team prides itself on rendering the necessary legal service with a personal touch. We will present you with various options that would address your legal issues and recommend the best approach possible based on our professional assessment. However, we would not only give you sufficient time to think and choose on your own, but we will patiently guide you through the process, every step of the way. We provide constant updates and feedback so you and AJ Law LLP can make your life-altering legal decisions hand in hand.